Established in 1991, Scandinavian Arcturus invigorated their name under the Behenian fixed stars, which are a selection of fifteen stars considered exceptionally helpful for magical applications in the medieval astrology of Europe and the Arab world. Apart from their cosmopolitan yet avant-garde carnivalesque dementia formerly settling into the second wave of Norwegian black metal, Arcturus have lately confirmed their first live and sole performance on Brazilian soil, which will take place tonight, March 4th, on Hangar 101 in São Paulo, presented under the liability of the Cronos Entertainment agency.

After nearly three decades of liveliness (twenty-nine years to be more precise), and straightaway enshadowed for more than ten years in silence (the act went into hiatus in 2007), Arcturus discharged their latest studio album, and their fifth full-length, entitled ‘Arcturian’ on May 8th, 2015 through Prophecy Productions, a German record company based in Zeltingen-Rachtig, and founded by Martin Koller in 1996.

The album saw a partially reinvented Arcturus regaining stance amidst the avant-garde metal scene, yet blending new modern components into their structure, while lead by the brilliant and monumental vocalizations of Simen Hestnæs, better known as ICS Vortex, and for his past participation on Norwegian blackened Thelema, Dimmu Borgir.

The ‘Arcturian’ artwork was crafted by Costin Chioreanu of Twilight13Media, which also recently got involved with Swedish Spiritual Beggars, At The Gates and Grave.

As a side note, Borknagar released their freshest album, ‘Winter Thrice’, the tenth of their career on January 22th, 2016 through Century Media Records. ‘Winter Thrice’ emphasizes special appearances by Kristoffer Rygg, frontman of the progressive act Ulver as well as double Spellemannprisen-nominated and double Oslo-prize winning vocalist, who intriguingly, is also former Arcturus vocalist and lyricist, followed by Simen Daniel Børven (former Arvinger and currently, bass player for Leprous), Pål Mathiesen, who is best known as the former vocalist of Susperia and now the vocalist for Chrome Division, and ultimately, Jens Peter Daniel Bogren, who is a record producer, mixer and recording engineer who has worked on albums by Opeth, Katatonia, Soilwork, James LaBrie, God Forbid, Kreator, Devin Townsend, Ihsahn, Dark Tranquillity, Paradise Lost, Amon Amarth, Dragonforce, The Ocean, Haken, Rotting Christ, Symphony X, and Myrath amongst others, based at Fascination Street Studios. 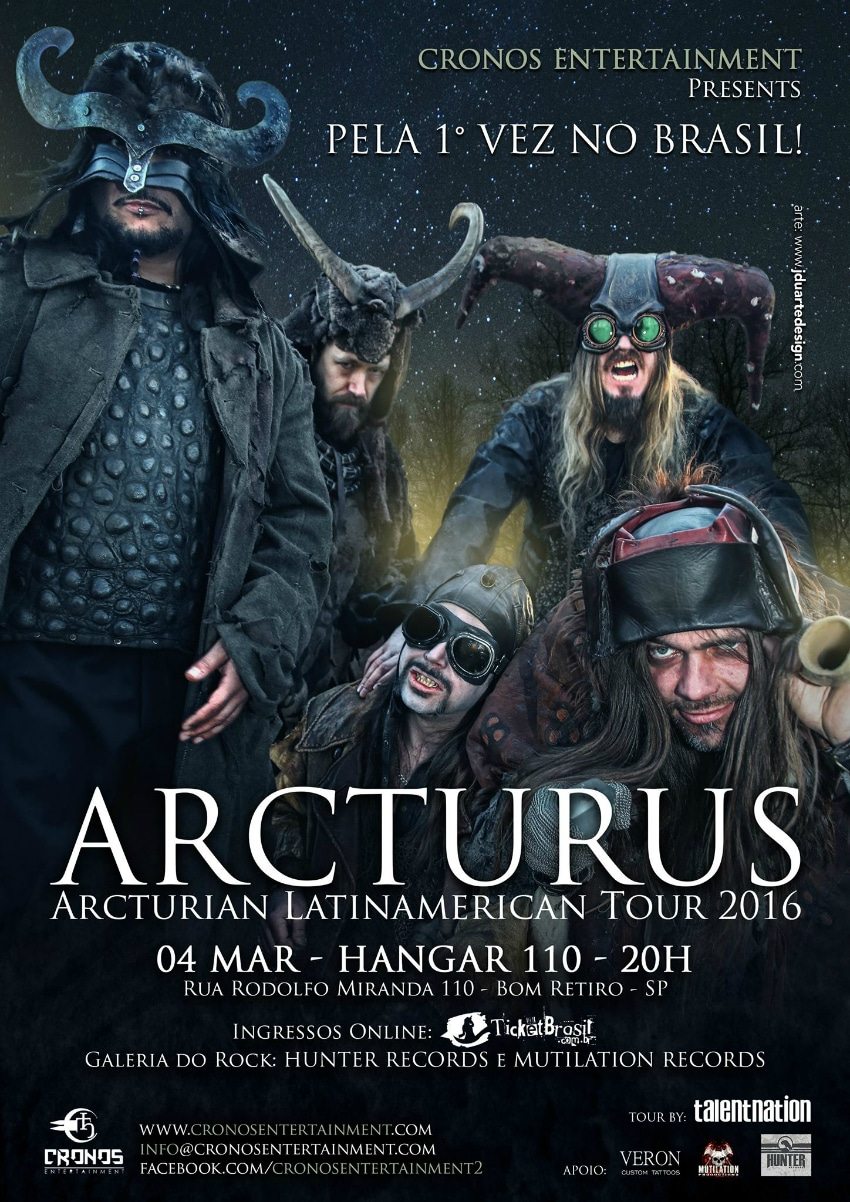 In regard to their presence in Brazil, tonight, Arcturus will be performing on Hangar 101 in São Paulo, at 20:00 for the very prime time, this as far as we could be capable of determining since even thus we have reached Cronos Entertainment for more accurate information, they never approached us back neither apprised us of how much is the value of the tickets to the event. This live performance, is part of their Arcturian Latin American Tour 2016, which will be reaching Argentina, Chile, Peru, Colombia, and finally México.

Since the very beginning, Arcturus outlived characterized by their unique sonority that often resounded the experimentalism and carnivalesque side while eliciting their essence from the majestic, yet symphonic black metal field with the inclusion of classic music.

For the madly interested, Arcturus is part of the constellation Boötes, which is the brightest star in the northern celestial hemisphere. With a visual magnitude of −0.05, it is the fourth brightest star in the night sky, after −1.46 magnitude Sirius, −0.86 magnitude Canopus, and −0.27 magnitude Alpha Centauri. It is a relatively close star at only 36.7 light-years from Earth, and, together with Vega and Sirius, is one of the most luminous stars in the Sun’s neighborhood.

Speaking of Simen Hestnæs, I had the grand opportunity to in 2011 hearken attentively to his solo album, titled ‘Storm Seeker,’ which was released back then by Century Media Records. ICS Vortex’s ‘Storm Seeker’ remains one of my predilected progressive metal releases of all time, and a misfit among releases of the genre. Definitely worthy.

4 Extraños en D.C. V2.0 release party will be off the charts

This article analyses the comic book series Spawn, by the Canadian Todd McFarlane

The legend of the Countess Erzsébet Báthory presents a unique case in which the fictional elements of vampire and witch folklore combine with real historical facts to create the quasi-mythical figure of the Bloody Countess.

Hammer Film Productions had found itself in the shadow of something much more exciting and potentially more profitable, and nothing at 113 Wardour Street was ever going to be quite the same again

Unearthing the Witch, and the Folkloric Diabolical Goddesses

The Aesthetics of Gray Tone Colour in Dark Goth Music

Tales of Terror from the House of Blackwood

Justice League vs. Teen Titans This is Raven’s song

The Female Spectator as an Object in the Horror Cinema

The Female Gothic: From the Second-Wave to Post-Feminism

Recurring Cultural Work of the Gothic and Zombie Fiction

The Female Gothic: From the Second-Wave to Post-Feminism

Goth Subcultures and the Diversified Entities Within the Subculture

“Blue Collar Goth”: Contextualizing Baltimore Identities Outside of the Club

Elder Goths and the Temporalities of Aging in the Mainstream Culture